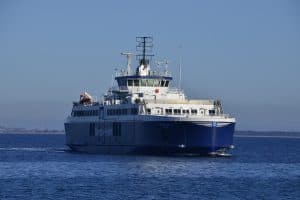 The M/F Samsø is a Danish domestic ferry that is the country’s first such vessel to be powered by liquefied natural gas. This type of ferry is much more environmentally friendly than traditional models, as the use of natural gas − when compared to conventional fuel oil − results in a reduction in the ship’s sulphur emissions (by 90-95%), nitrogen particles (80%) and CO2 (20-25%).

OSK ShipTech is the advisory firm of marine architects and engineers behind the design of the M/F Samsø. According to Kristian Careø Lind, a marine engineer and director of the firm’s Aarhus office, demand is on the rise for environmentally-friendly alternatives as a result of the stricter environmental legislation.

“The more environmentally-friendly solutions like LNG are the result of the International Maritime Organisation’s new and stricter environmental regulations, which came into force at the beginning of the year. The new rules mean that exhaust from ships that sail in the Baltic Sea, the North Sea and the English Channel may only contain 0.1 per cent sulphur,” Kristian Careø Lind says.

The M/F Samsø is far from the first ship of its kind. In neighbouring Norway, a number of LNG ferries sail routes through the country’s fjords. There are currently 44 ships that are powered by liquefied natural gas, most of which are European ferries – and an additional 34 are on the way. When it comes to both existing and planned LNG ships, Norway is way ahead of the pack, though countries like Germany, Sweden, Finland, France, Croatia and Denmark are climbing steadily.

Hoyer motors assist in the opening of bow doors.

The story of the new ferry is more than that of being an environmentally-friendly vessel. On board, there are electric motors from Danish company Hoyer, which has supplied various explosion-proof electric motors for the ferry’s ventilation systems, which are used in the engine room, the LNG pipework and elsewhere in the ship.

Hoyer has also provided six 99 kW motors for two hydraulics stations, which, in addition to opening the bow door so that cars can drive on board, also power the anchor and mooring winches.

Constructed at a shipyard in Poland

Even though Hoyer has provided motors for a Danish-designed ferry that sails in Danish waters, the motors had to cross Denmark’s border to be installed. The M/F Samsø was built at Poland’s internationally renowned Remontowa shipyard, which has previously constructed 10 LNG ferries.

“Hoyer Motors was first and foremost selected for our high level of quality, our references and our maritime certifications,” says Adam Slupinski, Hoyer’s Country Manager for the Polish Market.

Adam is part of Hoyer’s six-person Polish team, which has worked from the company’s Hadsten office to build relationships with its business partners in Poland. Two of those have produced the ventilation and hydraulic units for the ferry.

Source: The Danish Shipowners’ Association (Rederiforening), The Danish Department of the Environment