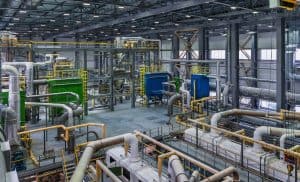 Special industrial environments require special equipment. This was the premise when in January 2015 Hoyer launched the project concerning the delivery of two large motors for its Czech business partner KUBÍČEK VHS. The manufacturer of blowers needed 400 kW electric motors as part of a delivery of an exhaust system to a Czech chemical factory. Here, the blowers are used to remove gas in connection with toxic cyanide production, and this has called for certain modifications to one of the two motors:

“What characterizes this order is that both motors will be used at a chemical factory with high quality and documentation requirements. This means that one of the motors is a non-sparking Ex nA motor, while the other is standard. In addition, both motors are fitted with forced ventilation, current-insulated bearings for frequency converter drive and roller bearings for belt drive,” says Adam Slupinski, Country Manager for Hoyer.

In June, when Hoyer delivered the two motors to KUBÍČEK VHS, it was neither the first nor the last time the two companies would work together. Since 2012, Hoyer has delivered motors to the Czech company, which has experienced solid growth since its establishment in 1991. According to KUBÍČEK VHS’ Sales Director Jakub Spicka, the reason for the corporation is Hoyer’s core product and service:

“When we chose Hoyer as a supplier, it was primarily because of their products, which are high quality and highly adaptable. At the same time, Hoyer offers short delivery times, great flexibility and last, but not least, professional and personal customer service,” he says.

Like Hoyer, KUBÍČEK VHS is a family-owned company, and perhaps that is one of the reasons why the two companies have found common ground across Europe. In the process, the trust between the two has grown through the years:

“I really believe that mutual trust has to be the basis of any partnership. This is also true of the cooperation between KUBÍČEK VHS and Hoyer, which has been very successful for a number of years now. The proof lies in the fact that the volume of standard orders is rising annually and that we are cooperating more and more on specific individual projects, such as the two 400 kW motors,” says Jakub Spicka.

As a natural consequence of the increased cooperation with KUBÍČEK VHS and other Czech customers, in 2015 Hoyer intensified its focus on the Czech market, e.g. by employing a Czech-speaking sales engineer at the head office in Denmark. Here, he helps the rest of the Eastern European Country Team to work together with KUBÍČEK VHS and Hoyer’s other customers on these markets

37 kilometres of chain for Egypt