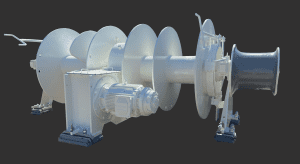 As any sailor knows, there is a world of difference between working above and below. On the deck of an ocean-going vessel, you must take precautions to endure the harsh exposure to sun, wind and salty seawater or suffer the consequences. This applies to both humans and machinery.

While the vast majority of marine applications are housed below deck and thereby relatively well protected from the environment, deck machinery like cargo cranes, hoists and anchor/mooring winches are a different matter. Using a standard marine electric motor for these exposed applications is usually a recipe for a critical failure. Instead, a custom-built brake motor is specially built to handle the job.

– Deck machinery is at constant risk of being submerged by heavy waves of saltwater. When these waves hit the deck with immense pressure the seawater enters everywhere, which will cause extensive and irreversible damage unless the motor is specially prepared to withstand it. A motor that operates in this kind of aggressive environment needs to be well protected, says Maarten de Beun, Sales Manager – Deck Machinery at Hoyer.

The extra protection and quality are even more important because deck machinery such as winches and cranes are often critical for the operation of the vessel. In many cases, the equipment must be in good working order for the ship’s classification to be valid, which means that if the motor fails, the vessel cannot legally leave port until it has been repaired or replaced.

Another factor to consider is the infrequent use patterns which means that some brake motors can go weeks without being turned on, because the winches and deck cranes are only used when the vessel is in port or unloading cargo.

– On fishing vessels for example, some winches and hoists are only in operation for a couple of minutes each month. Extended periods of inactivity are not good for a motor, so you need a lot of redundancies to make sure it works when you turn it on. A failure while trying to unload a large catch can be catastrophic for a fishing owner, says Maarten de Beun.

Brake motors for deck machinery are almost always custom-built for the specific use and application, with strict protocols for assembly. Since we use a modular building concept, we are able to realize customers preferred solution at our own assembly workshop.

One important aspect in making a custom-built brake motor is the assembly of all various and specially designed components. This is why it is important to have dedicated workers who are highly trained and know the consequences of sloppy work. Even the smallest parts, like bonded seals and O-rings, are non-standard to get more reliable motors, says Maarten de Beun.

Ideally, the cooperation between customer and motor supplier begins in the design phase, directly involving the engineers designing the specific application. This way, factors like space requirements and environmental impact can be taken into consideration. Hoyer has recently updated all brake motor drawings to be available in detailed 3D versions, so customers can position elements like cables and plugs with exact precision.

While relatively simple three-speed motors were previously the most common option for winches, the market has shifted to variable frequency drives (VFD) solutions. Today, most major winch manufacturers use single-speed motors with a VFD, which provides more accurate control to allow for precise positioning while being less electrically and mechanically stressful for the motor.

– Some customers simply want to run a 180 Hz motor at full speed to retract a line as quickly as possible, but in many applications, it is an advantage to be able to use the VFD to act as a brake and hold the torque. Especially for winches which have a more dynamic use with constant tensioning to keep the line tense, says Maarten de Beun.
Many deck machinery applications also use sensors like encoders to provide input for dynamic use, for example to control tension or determine how much a line has been extended. These small and delicate electronic devices need special, watertight protection to survive in the wet and salty environment.

On the Marine Market section, you can read more about our approach to the marine market, typical applications and information about testing and classification. 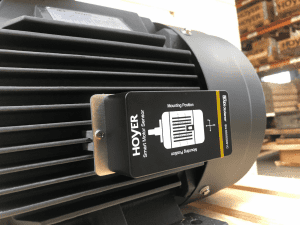